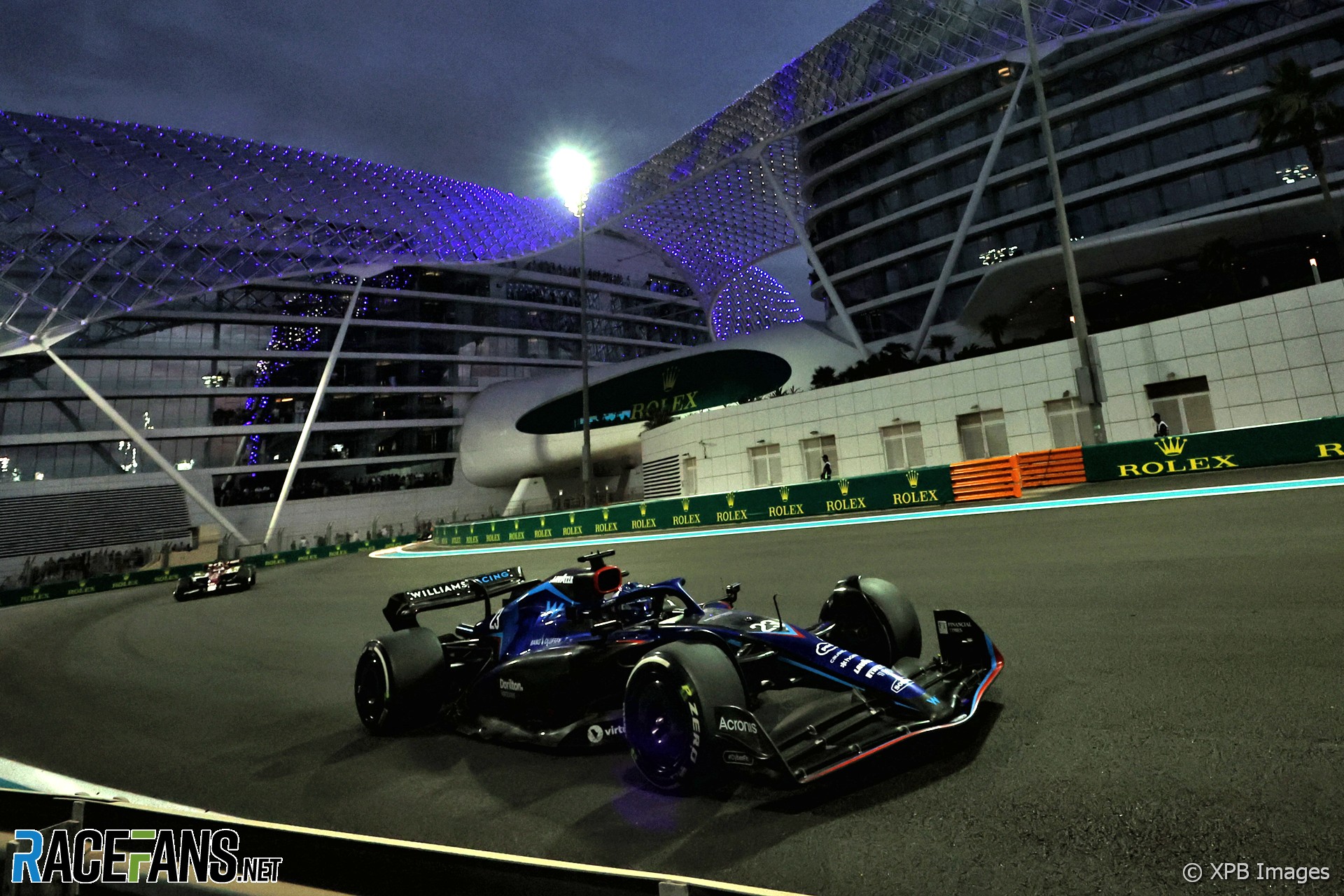 In the round-up: Alexander Albon believes his Williams team scored points every time they had the opportunity to in 2022.

Alexander Albon believes his Williams team scored points every time they had the opportunity to in 2022.

Williams finished tenth and last in this season’s constructors’ championship after scoring a total of just eight points. Despite scoring top ten finishes in just five of the year’s 22 grands prix – including Nyck de Vries scoring an eighth place in Monza when Albon was medically unable to race – Albon believes his team still capitalised on the few opportunities they had in the season.

“I feel like the biggest one was being healthy for Monza,” Albon said. “That would have been my main points opportunity.

“Other than that, I’m not sure. I really do feel like in the moments where we’ve had the chance to score points, we have. Unfortunately, that’s where we are this year. It’s been a year where we’ve had everything to go perfectly for us, a bit of fortune as well, and that gets us into the points.

“We don’t want that to happen next year, we need to work hard, we need to really nail the balance issues that we’ve been having this year and if we can get on top of that, I feel like as a team we always seem to be maximising opportunities and that’s good.”

Schumacher pole in Brazil would not have saved his drive – Steiner

Haas team principal Guenther Steiner says that Mick Schumacher’s future with the team would not have been saved had he taken pole position in Interlagos rather than his team mate.

Kevin Magnussen stunned the paddock by securing pole position in Friday qualifying for the Brazilian Grand Prix in wet conditions. Schumacher qualified slowest in 20th and lost his drive at the end of the season to Nico Hulkenberg. Steiner says Schumacher would not have been retained even if he had been the one on pole in Brazil.

“Nothing would have changed,” Steiner said. “Because you cannot make this decision on an emotional one race or one qualifying result. That would be wrong. It could be wrong both ways.”

Bottas planning to compete in Race of Champions

Valtteri Bottas says he is planning to take part in next year’s Race of Champions over the off-season.

The all-star racing event featuring racing drivers from various international motorsport series will take place in Sweden at the end of January. Bottas says he is intending to take part in the event for the firs time.

“That’s the plan, yes,” Bottas said. “I never done it. At the moment I’m definitely going, so I’m looking forward to it.”

"One hour I could be creating 3D mockups of the car for our commercial team to attract new partners, creating large format prints for our hospitality team and Paddock Club, the next I could be updating our assets for our Esports team. No two days are the same as the brand team (the team I sit in) provides graphic based services the whole business."

"The Formula 1 season may be over, but here are five reasons not to sleep on LEGO Technic’s eye-catching 42141 McLaren Formula 1 Race Car, particularly during Black Friday."

The day McLaren won in a McLaren: 'We were all so excited' (Motor Sport)

"Bruce was a natural leader. He never criticised people, he led by praise and positive encouragement, so if there was no praise you knew you hadn’t done a good job."

"For years, Daniel Ricciardo has been one of Formula 1's most notorious overtakers! Jump onboard with the Aussie as we look through some of his signature lunges at Red Bull, Renault, and McLaren!"

We always endeavour to credit original sources. If you have a tip for a link relating to single-seater motorsport to feature in the next RaceFans round-up please send it in via the contact form.

Creating foundations of the future of Formula 1 in Las Vegas. The first of nearly 4,000 crash barriers have been cast. Weighing in at 8818 pounds (4 tons) each these barriers will line the soon-to-be iconic Las Vegas Strip Circuit™. #LasVegasGP #F1 pic.twitter.com/YvAe6ETbPU

reunited with the AT01 🤜🤛 @PierreGASLY pic.twitter.com/M37tPK2hUi

After Andretti IndyCar drivers Alexander Rossi and Colton Herta were ranked ninth and tenth in RaceFans’ top ten IndyCar drivers of 2022 list, reader amian believes it speaks more to the team than the drivers…

There’s been something wrong with Team Andretti engineering – everybody seems to be underperforming in their cars. Grosjean hasn’t been any better with them then with little Coyne racing and Herta has looked to have stopped developing forward. I’m sure Rossi will have a much better season next year with McLaren, although with the IndyCar field stacked as it is, it might not neccessarily result in a better championship finish.
amian

On this day in motorsport

Will has been a RaceFans contributor since 2012 during which time he has covered F1 test sessions, launch events and interviewed drivers. He mainly...
Read more about Will Wood, find all their articles and get in touch with them

Got a potential story, tip or enquiry? Find out more about RaceFans and contact us here.